In this post the reasons why doctoral students attend conferences are contrasted with normative assumptions within institutions, thus illustrating a gap in harmonising three key factors in doctoral education: student motivations, professional expectations and institutional support. 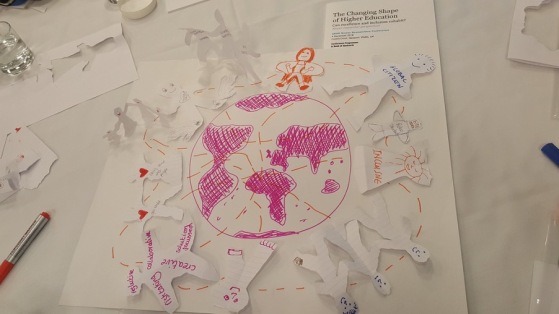 In the globalised context of higher education, it is often expected that doctoral students will attend conferences to exchange knowledge , disseminate current research, network and socialise into their academic tribes. In short, as Emily Henderson, has noted, “in academia, we are all supposed to do it” (p. 914). “It” in this case means embodying the intellectual, emotional and social aspects of academic conferences, as conceptualised in Henderson’s path-making paper. Academic conferences are also described within the framing of academic mobility as part of professional expectations, and they are also tied to promotion, as described in a recent Conference Inference post by Kimberly Jamie. Drawing on their study that involved 20 attendees at a conference in North America, Kuzhabekova and Temerbayeva have also examined the importance of conferences in the socialisation of doctoral students as part of the preparation to become future scholars to work in academic and non-academic research positions. However, as we (Omolabake Fakunle, Mollie Dollinger, Joyceline Alla-Mensah and Blair Izard) have argued in our paper on this topic, there is limited research into doctoral students’ perceptions with regards to their motivations and expectations for attending conferences, particularly from a cross-national perspective.

This blog post, then, provides a snapshot of doctoral student motivations for attending conferences. The aim is to highlight a range of student perceptions, sampled in different countries. The discussion in this blog post is drawn from the findings of a one-year funded graduate collaborative research project that explored doctoral students’ motivations for attending domestic and international conferences. The research sample included doctoral students studying in Schools of Education in four universities in Scotland, England, Australia and the US. The mixed method study involved two complementary stages. For stage one, 214 responses were received from the online survey questionnaire sent to doctoral students in the schools of education across all four institutions. A total of 23 doctoral students participated in the second stage of the study involving focus group interviews conducted at each of the four institutions. Details of the study including the research design and findings related to two of our research questions below have been published here, and in short sought to discern trends in doctoral students’ participation in domestic and international conferences, as well as their motivations for participating in such conferences.

In the survey, we asked the participants to rate a variety of motivations for attending conferences. The study found that doctoral students’ motivations for attending conferences can be grouped into four categories. The first category is the highest ranked category, based on the survey data. This relates to their current academic role as doctoral students. Within this category, their motivations fall within the five themes listed here in order of importance:

– networking with other academics

– guidance on their doctoral project from other academics

– networking with other doctoral students

The limitation of using closed questions in survey data, such as the ones related to rating students’ motivations, is that they did not capture the range of the student experience at the conference. For example, on the one hand, student motivations include getting feedback on their presentation. The students acknowledged this to be an important aspect of their development as researchers and disseminating their research to external audiences. However, on the other hand, as Julie Mansuy recently asked in another Conference Inference post, “as an ECR [early career researcher], what is the ‘right’ approach to discussing potentially controversial aspects of my work and opinions in conferences?”. This suggests that doctoral students may seek feedback to assuage their concerns about the “merit” and “fit” of controversial aspects of their work. This, however, begs the question: to what extent does the academic conference provide what Julie describes as a space where doctoral students can be true to themselves and their research, without the risk of annoying a few people who may find their work controversial?

The second highly ranked category relates to employment opportunities. This is unsurprising, considering the well-known issue of precarity in the academic profession. In the follow-up focus group interview, this category was teased out further. The participants explained how they envisage that conferences will give them visibility in their field and networks that could lead to future job opportunities. Here, it is pertinent to point out Donald Nicolson’s caution about thinking of conferences as a return on investment (ROI), for example, in terms of time, money and possible benefits of networking and career development. Some of the students seem to also consider the limitations of career prospects as an ROI of attending a conference. They shared their scepticism about the possibility of obtaining employment through conference networking, one of the main barriers being that there is a perception that it is difficult to “penetrate” established networks which are sometimes made up of colleagues who have been attending conferences together for years. They described how new attendees could feel like outsiders. Some students talked about attending social events where they did not know anyone, and the feeling of isolation that they felt despite being in the midst of many people.

The third ranked category relates to networking and collaborative opportunities outside academia. Within this category, the students selected two motivations for attending conferences, “Networking with government, industry, third sector, NGOs” and “research collaboration with industry”. The lower rating for this category might suggest that the PhD students were more interested in pursuing an academic career. At the same time, considering the precarity in the academic profession, it is curious that the study participants do not seem to be exploring careers further afield. This opens up two possible scenarios; perhaps they explore non-academic networking in other contexts. It is also possible that the participants did not consider academic conferences to be the “right” place to seek non-academic networking opportunities. This was not the focus of our study, so this category was not explored further, but could open up further questions for exploration.

The fourth category examines personal motivations. It includes “visiting friends/family” and “sightseeing and tourist attractions”. This was the lowest ranked motivation to attend an academic conference. Further probing during the focus group interview did not yield any additional data that contradicts the low priority accorded to this category in the survey. Suffice to say, in agreement with Emily Henderson, the doctoral students did not seem to see conferences as holidays.

This blog sums up key reasons why doctoral students attend conferences. The participants found conferences to be academic learning sites that were complementary to their studies. This fits conferences into the spaces that Barnacle and Mewburn describe as non-traditional sites of learning in the process of ‘becoming doctor’. However, our research highlighted the paradox of a normative expectation that doctoral students attend conferences for reasons earlier mentioned in this blog post, and the relative lack of inclusion of conferences as a mandatory part of doctoral programs. This blog is written at a time of uncertainty and disruption due to Covid-19. As such, the notion of conferences and indeed academic mobility more broadly are being re-examined at different levels, and it is unclear what the ‘new normal’ would be. That said, academic knowledge exchange is not (or should not) be constrained by mobility, and many conference organisers have made the transition to online forms.

In conclusion, doctoral students mainly attend conferences in the furtherance of their academic development, networking and to enhance the visibility of their work. It remains to be seen whether institutions will consider including conferences as a mandatory part of doctoral programmes, and how this could be managed.

Omolabake Fakunle, PhD, is a Teaching Fellow and Coordinator of the MSc Education General Pathway at Moray House School of Education and Sports (MHSES) at the University of Edinburgh, Scotland. Her award-winning research explores the internationalisation of higher education, student voices in research, student experience, and employability. Find her on Twitter @LabakeFakunle

Acknowledgement: I wish to thank Universitas21 for funding the research discussed in this blogpost. I also wish to thank my research collaborators (Mollie Dollinger, Joyceline Alla-Mensah and Blair Izard) and doctoral supervisors in Edinburgh, Nottingham, Melbourne, Connecticut and Auckland for their contribution to the project.

2 thoughts on “Why do doctoral students attend conferences? (Omolabake Fakunle)”